How to build chatbots for Hangouts with Dialogflow by using custom payloads and cards.

The Dialogflow Hangouts integration lets you create bots you can include in one-on-one chats as well as chat rooms. From the Integrations menu on the left, you can enable this feature and select your agent environment.

You can follow this guide for more information: https://cloud.google.com/dialogflow/docs/integrations/hangouts

But you are probably here, to figure out how you can integrate this with rich messages such as cards, formatted texts, images or custom payloads. Maybe you are even trying to enable this via your fulfillment code. Well I got you covered!

When Hangouts Chat sends an event to a bot, it includes certain data in the event payload; the exact payload depends on the event type. This event and payload are contained in the HTTP call sent to the bot’s registered URL.

For some events, the bot may send a message to the chat in response to the event. This message is a JSON object, whose contents depend on what kind of message it is:

Out of the box, in the Dialogflow UI console, you could choose custom Hangout responses by clicking on the + button in the Responses block: 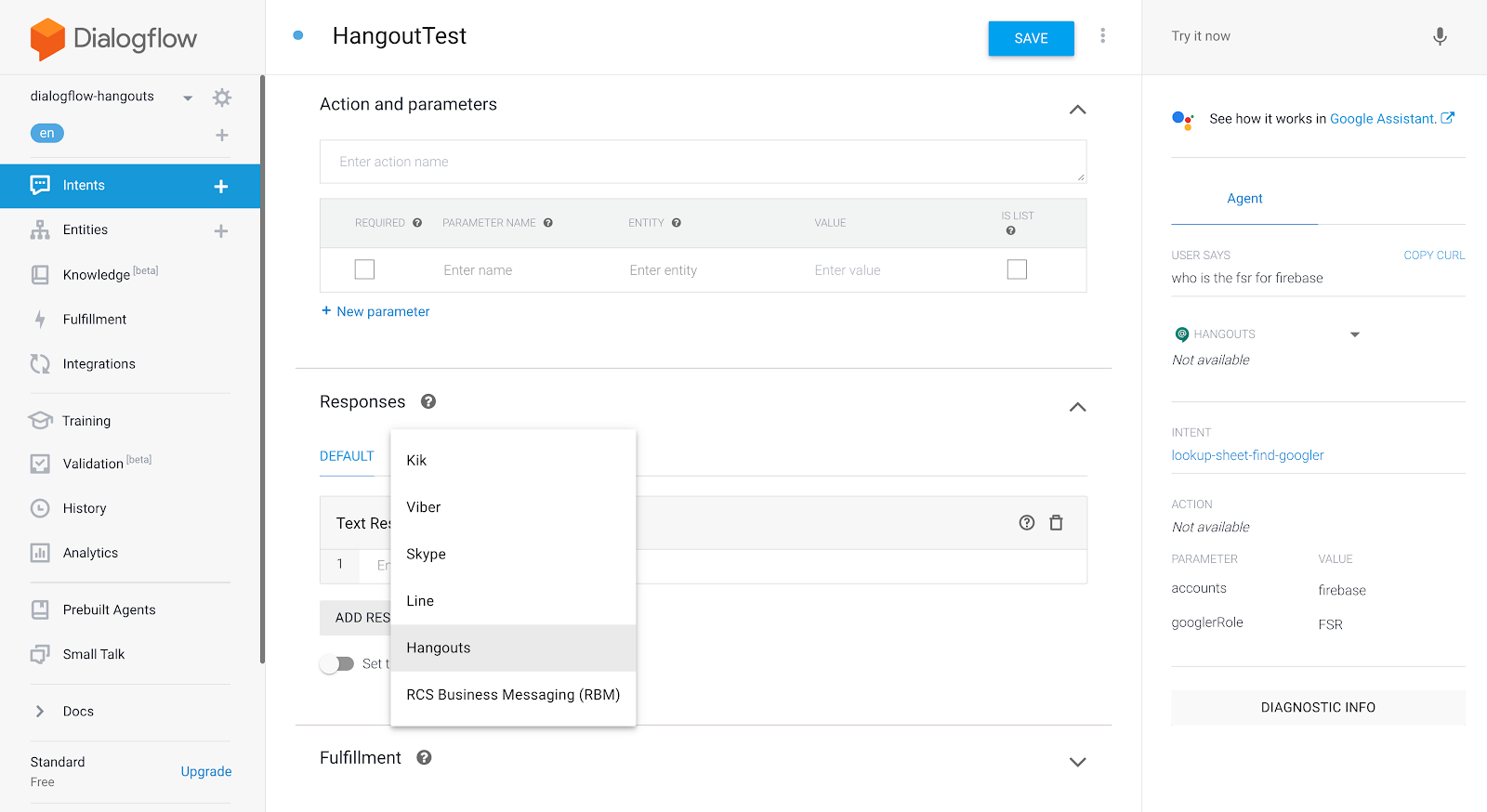 This allows you to create 4 different types of responses:

The Hangouts Text Response, visually looks the same as the Default Text Response in the Dialogflow UI console. However the raw api response will look a bit different as it also sets the platform config to “GOOGLE_HANGOUTS”, which could be interesting when building multi channel agents.

On top of that, you can change the text formatting. See SimpleText for example you can make text bold or italics by wrapping the text in certain (markdown light) symbols.

The Hangouts Image, will as the name implies insert an image in Hangouts. You can specify an image url.

The Hangouts Card allows you to create a basic Simple Card. You can set a title, a subtitle, an image url and multiple buttons (a label and an url): 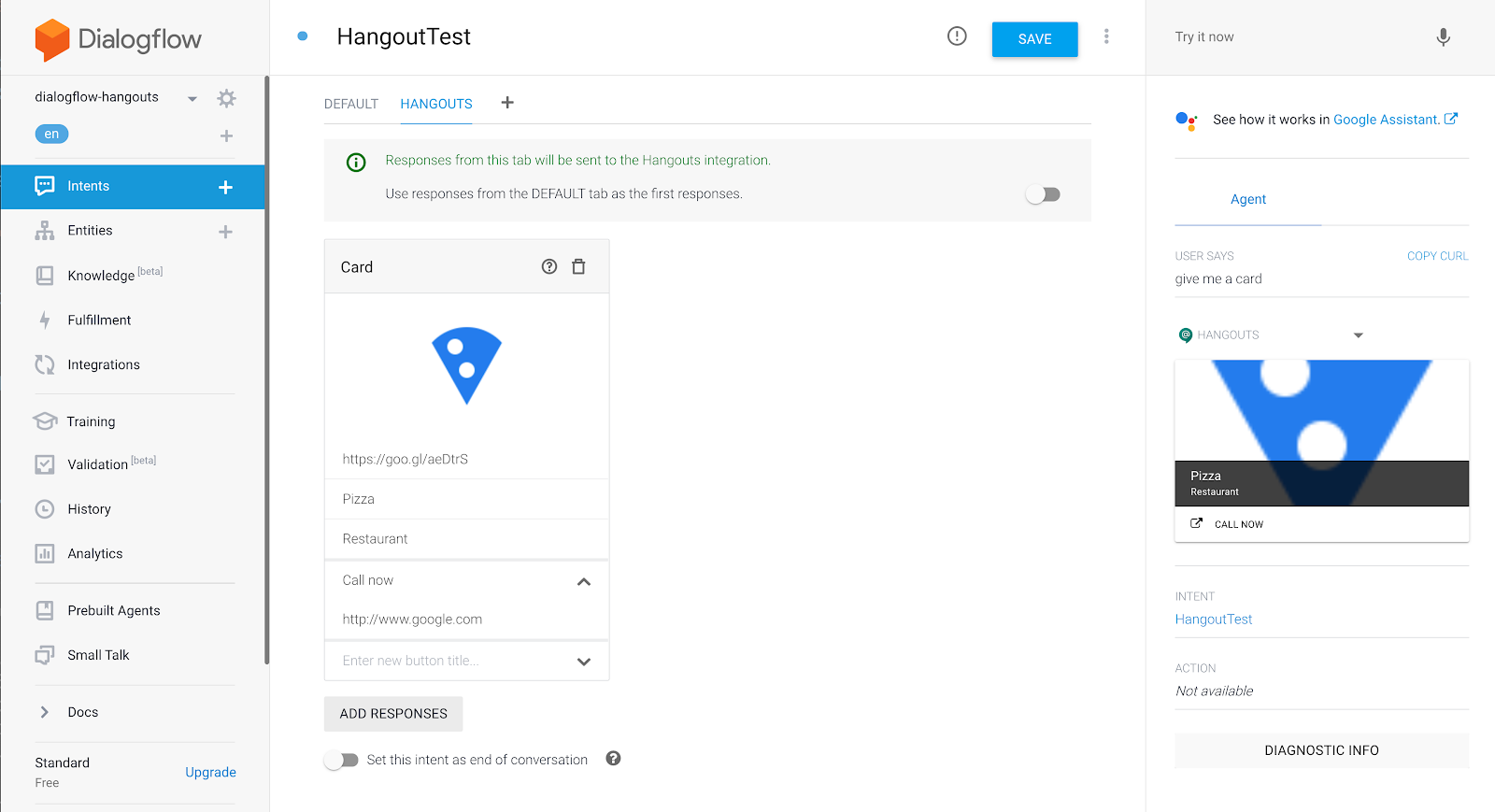 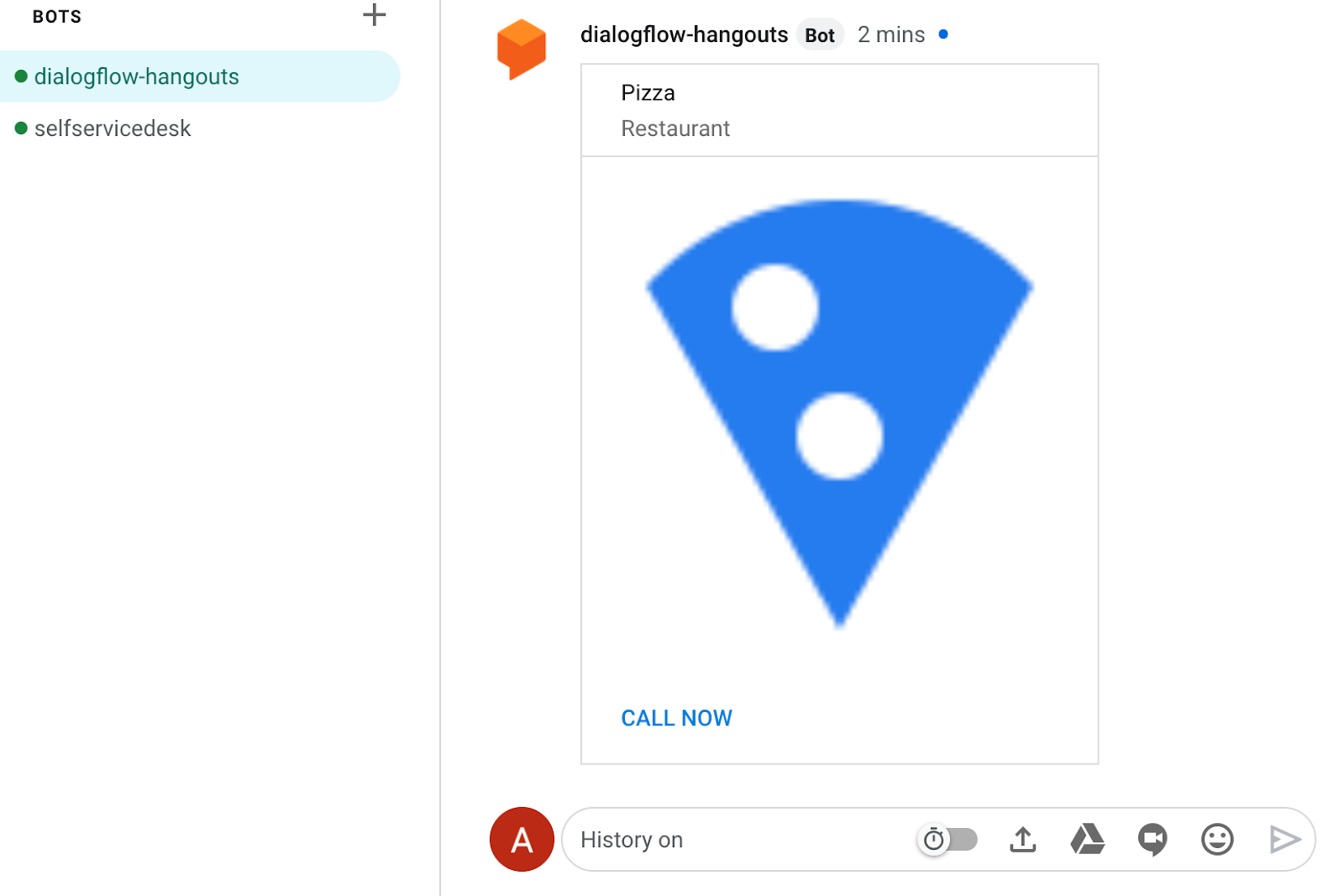 Lastly, there is the option to specify a Hangouts Custom Payload, now this is where the magic happens in order to create advanced cards. One card can have one or many sections. Each section could have a header.

You can have a look into the hangouts message formats cards reference guide, to see some of the combinations you can create with this: https://developers.google.com/hangouts/chat/reference/message-formats/cards

However, using custom payloads means that you will have to provide the JSON format.

Now if you copy and paste the examples of the reference guide to the custom payload box in Dialogflow, you will need to be aware of the following:

Unless you create static FAQ chat agents for Hangouts chat, you will likely fetch results from a server and display it in a component. For this you will need back-end fulfillment code (either in a cloud function (for example provided by the inline editor), or by specifying a webhook url.

(Note: You can’t use the actions-on-google npm package, since that library is meant for Google Assistant agents.)

Make sure you use version 0.6.1 (or higher). Although version 0.6.1 doesn’t have specific Google Hangouts platform recognition, the default Dialogflow Card, Image and Payload responses will work out of the box:

(The Suggestion chips won’t work in Hangouts, as they don’t exist in Hangouts Chat. … but you probably could use buttons for this.)

But assuming that you want a little more complicated cards than these, you will have to work with custom payloads. Let’s assume we have the following cloud function written in the Dialogflow fulfillment editor:

In Dialogflow we have created an intent called ‘test’, which has the fulfillment webhook enabled.

You can use the rich card example, I have used earlier in this article. Instead a function getCard, returns this custom payload object.

We are creating a Payload object. It’s important to specify the platform as a string: hangouts to make sure it will showup in Google Hangouts.

The second argument is the custom payload as mentioned before.

And we will need to specify a 3rd object, which sets the rawPayload to true, and make sure it will be sent as a message.

Go ahead, test it. It should work!

Disclaimer: The opinions stated here are my own, not those of my company. - © 2020 Lee Boonstra